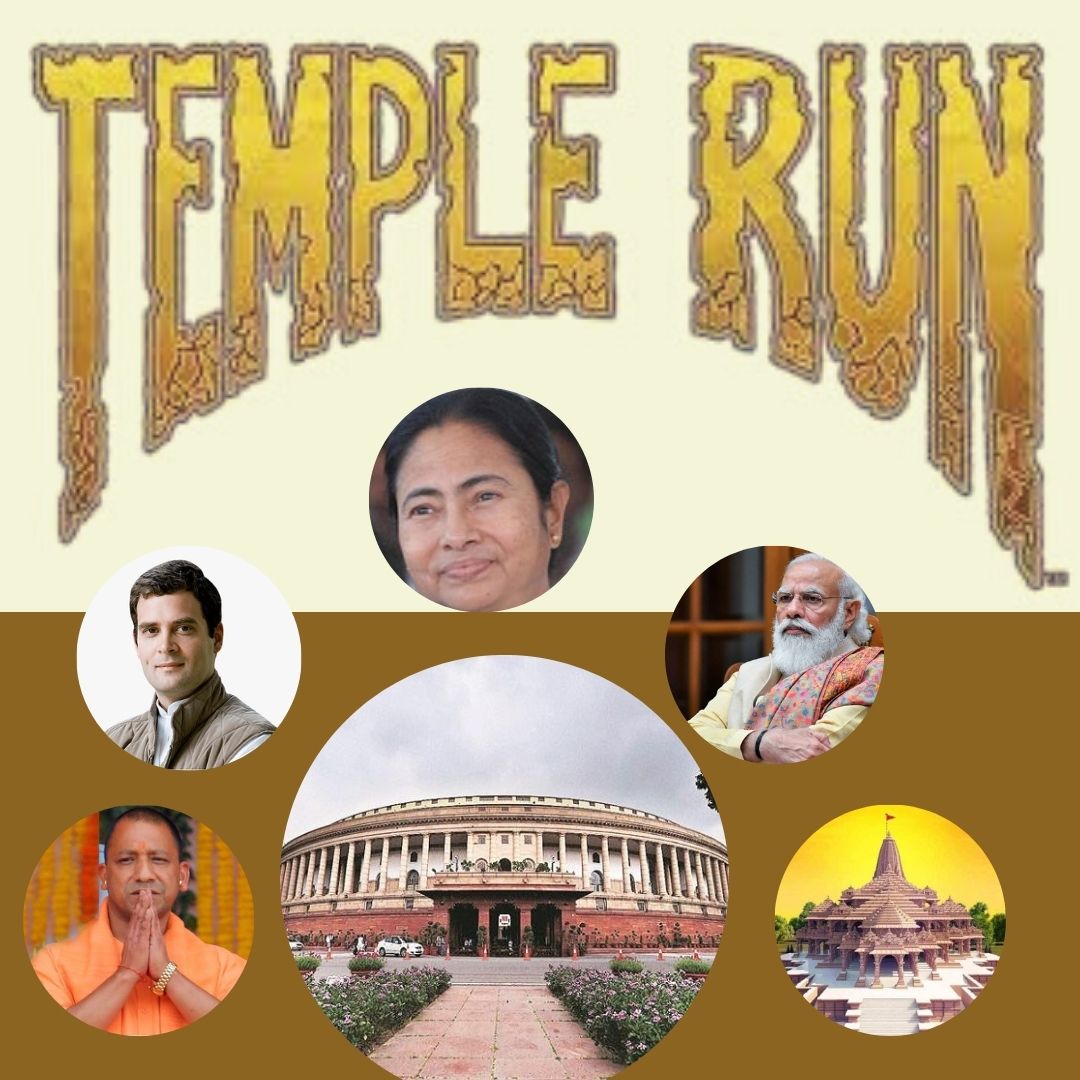 If you believe your faith has arrived at the ultimate truth, you might reject the idea that it will change at all. But if history is any guide, no matter how deeply held our beliefs maybe today, they are likely in time to be transformed or transferred as they pass to our descendants, or simply to fade away.

The Indian Constitution of India guarantees the right of individuals to run for public office regardless of their religion, caste or creed. But yet, our leaders love to play with religious sentiments. All these years, it has been politics of wooing the minority section of the society like Imams or Muslim clerics with special incentives, hospitals for Muslims, Sikhs, Farmers and many more have been wooed to please the Hindu Voters.

The Temple run culture has now become a trend for political leaders. It has also become a symbol of faith and belief in Hinduism. Every party and every leader is playing divisive politics based on religious sentiments, which has also become the USP for votes. To appease the majority Hindu voters, the ‘temple tactics’ seems to be a successful model for the major political parties.

For Instance, Chief Minister of West Bengal, Mamata Banerjee earlier restricted herself to Durga Puja and Ganga Sagar fair inauguration, when Hindu pujas and rituals were concerned. She was more often seen amidst the Muslim clerics with her head covered, asking for ‘dua’ (blessings). But ahead of the polls, she adopted the temple visit strategy either to woo Hindu voters or tap into BJP’s vote bank.

Leaders decide to turn their faith into a campaign cornerstone and sought to create political capital out of much-publicised and frequent temple visits. They visit a multitude of temples, climb thousands of steps to seek blessings, avoided visiting mosques and churches, all for the campaign. And if all this is not enough, the mention about their caste-like being brahmin or ‘janeu-dhari’.

It is not easy to let go of such supremacist behaviour. This rot runs deep into our political system. The majority of our leaders are uneducated. No one knows on what basis are the ministries allocated to these leaders. The only political progress we have made so far is that religion and caste have now been made central to national politics.

BJP has always been a government of Hindus from the beginning. It has set a Hindutva template, all over India, leaving opposition leaders with little to no choice but to join the bandwagon. And to counter political discourse, taking a soft Hindutva stand has become a political compulsion for opposition parties like Congress and Samajwadi Party. Being a religious political party, the BJP were aware of two things that assisted in their rise.

From religion, they knew that faith was more powerful than facts, and from politics, they understood that emotive narratives were more compelling than evidence-based arguments. So the Ram Janmabhoomi myth became central to the BJP’s platform. Having this as a cause to advocate would set the party against the ideals of the Indian state, and therefore gain it the attention it needed to become a major political player.

The parties have an instrument to polarise the electorate along religious lines to cut through issues of caste and to establish a more unified Hindu identity. The goal is to create a bloc of voters which would focus its attention solely on these issues of negative identity, the politics of who you are against, rather than policies that could make practical improvements to people’s lives.

The patience and processes of democracy are always unsatisfying, and the parties instead desire a physical demonstration of its burgeoning power, because power not only provides them with the ability to control circumstances, but it also allows them to avoid any consequences for their actions.

Around 51 Temple were removed from being under the direct control of the government, Allahabad’s name was changed to Prayagraj, and the government calls their action as responsive. But when it comes to responsibility and accountability of PM Care Funds, or about the government selling Public Sector Units, or anything another thing they can’t answer it becomes a matter of National Security for them.

On one hand, they promote and preach slogans like “Beti Padhao, Beti Bachao” in the banners and Posters, standing tall with chest out with folded hands and on the other, they tend to get what they had been preaching. And right before elections, they make a ‘Temple-Run’ for the campaign, hoping for redemption from sins is in addition to that.

For example, Uttarakhand Cheif Minister, Tirath Singh Rawat never fails to draw attention with his remarks like, ‘women wearing ripped jeans could not create a right environment for children or “Why didn’t you produce 20 children for more ration.” Such actions render one vulnerable to charges of hypocrisy and impressions that temple visits were borne less out of faith and more out of a compulsion to tap into majority sentiment. The thing is that hypocrisy was never a liability in politics. It is, on the other hand, an essential tool. Not even one politician who isn’t a hypocrite and If he isn’t, he is a sure loser.

Comments (2) on “TEMPLE RUN: The Drama in Democracy”