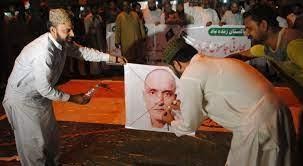 Kulbhusan Sudhir Jadhav (also spelt Kulbhushan Yadav) is an Indian National. He was born on 16 April 1970 to Marathi Family in Sangli, Maharashtra. His father Mr Sudhir Jadhav is a retired Mumbai Police Officer and his mother Mrs Avanti Jadhav a homemaker.

Kulbhusan Jadhav (hereinafter “Mr Jadhav”) is a married man to Chetankul Jadhav with two children. His family resides in Powai, Mumbai. Mr Jadhav joined National Defence Academy in 1987 and was commissioned in the engineering branch of the Indian Navy in 1991. After serving in the Indian Navy for more than 13 years he had decided to seek retirement in 2001.

After, 14 years of service, Mr Jadhav was inducted into intelligence operations in 2003 and established a small business in Chabahar Port in Iran.

But, after some time on 03.03.2016, his life become a disaster and he was hit by a storm, Pakistan government detained him from Balochistan near the border with Iran. Mr Jadhav was arrested under the charge of “espionage and terrorism on behalf of India”