Trespass to Land and its remedies 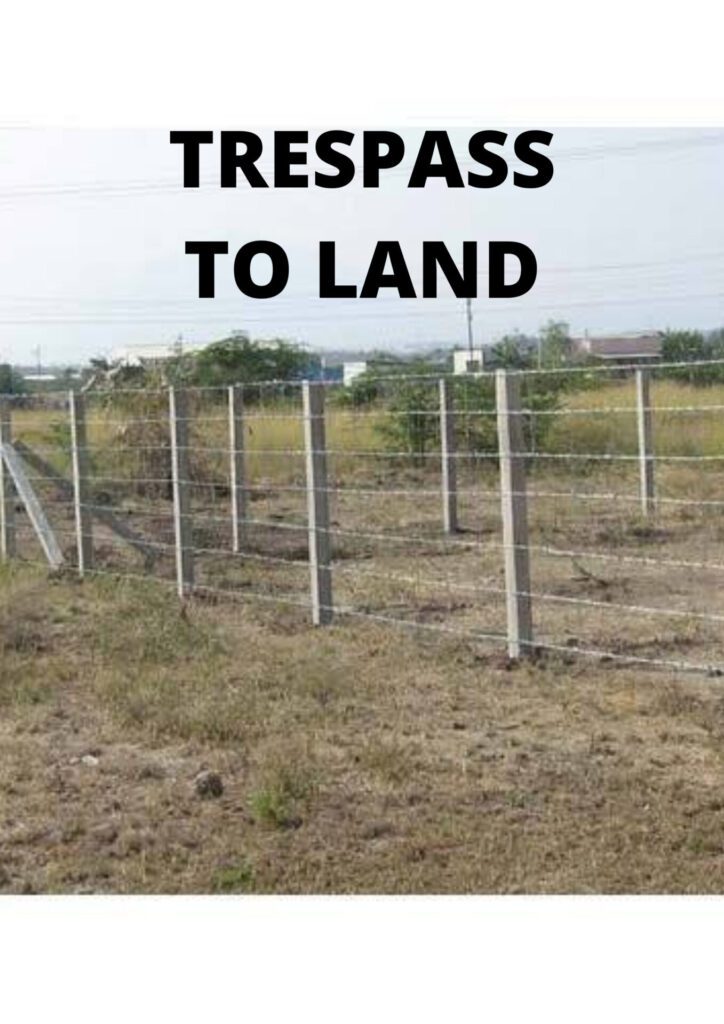 Meaning of Trespass to Land

Trespass to land is one type of trespass. Others are trespass to person and trespass to goods, conversion and detinue.

How can the trespass to land be committed?

Trespass may be committed by –

Trespass includes going beyond the purpose for which a person has entered certain premises. When there is justification to enter premise of others, there is no trespass. A man is not responsible for involuntary trespass, such as when he is thrown into someone else’s land. But he is liable if the intrusion is purposeful.

Even an honest error may not be a justification. And a person may be held accountable for trespass when he accesses another person’s land while honestly thinking it to be his own.

Examples of trespass to land

The defendant was the plaintiff’s tenant in Madhav Vithal Kudwa v. Madhavdas Vallabhdas[1]. He lived on the first level of a multi-story structure. He used to park his automobile in the plaintiff’s building’s compound. The plaintiff claimed that parking the automobile in his premises without his consent constituted trespass and sought an injunction.

It was decided that the tenant of a multi-story building has the right to utilise the property, if any, around the building for parking his car or other vehicles without causing any trouble to anybody, and that this right can be used without the landlord’s consent.

The plaintiff held the land under an invalid lease in Graham v. Peat[2]. Yet he was allowed to initiate a trespass case against the defendant who had invaded the land without legitimate basis. Reasoning given was “any ownership is a legal possession against the offender.”

When the defendant enters by legal power rather than the plaintiff’s authority, and then abuses that privilege, he becomes a trespasser from the start (from moment of entry). As a result, the plaintiff can seek damages not only for the later improper act of the defendant, but also for the first entry, which is now constituted trespass.

Six carpenters entered an inn and ordered some wine and bread in Six Carpenters’ case[3]. After having taken the same, they refused to pay for that. They had done no act of misfeasance and mere non-payment being only nonfeasance, there was held to be no trespass ab initio.

Misbehavior must be such that the defendant’s presence on the premises is completely unwarranted. The case of Elias v. Pasm[4]ore exemplifies this concept. In that instance, the defendants, who were police officers, invaded the plaintiff’s property in order to conduct a valid arrest. They deleted specific papers without having any legal power to do so, which was an act of misfeasance.

Their presence there had not been entirely illegitimate as a result of their misbehaviour because the arrest, i.e., the authorised purpose, had yet to be completed. They were only considered trespassers in relation to the papers they had taken, not trespassers on the premises in general.

In Chick Fashions West Wales Ltd v. Jones[5], the Police seized goods that they mistakenly thought were stolen while searching the Plaintiff’s premises for the goods. The seizure was held to be lawful because Police entering premises with a warrant had authority to remove anything that they believed was stolen.

Entry with a license

A licence is an express, implicit, or contractual authority to access land. The defendant cannot be held accountable for trespass that has a license to enter the land. License constitutes entering certain properties with the permission of the person in possession.

“Where one person grants to another, or to a definite number of other persons a right to do, or continue to do, in or upon the immovable property of the grantor, something which would, in the absence of such right, be unlawful, and such right does not amount to an easement or an interest in the property, the right is called a licence.”

When a licence is revoked, the licensee becomes a trespasser on the land and must leave within a reasonable period. The licences are classified into two types for the purpose of the licensor’s power to revoke them:

A bare licence can be cancelled, but a licence that is paired with the grant cannot. A licence to view a movie, for example, is a permission that comes with the grant, and the cinema authorities cannot withdraw such a licence.

Similarly, a permit to chop down and transport a tree is an example of a licence combined with a gift. Under some situations, the licensor may promise, expressly or implicitly, in the terms of the contract that even a minimal licence will not be cancelled.

The outcome in Hurst v. Picture Theatres Ltd[7]. is exactly the reverse. Following payment, the plaintiff purchased a ticket to watch a movie at the defendant’s theatre. He was wrongfully accused of entering without a ticket and was ordered to leave the venue by management.

When he refused, the defendant’s gatekeeper forcefully dragged him out of his seat, and the plaintiff quietly exited the cinema theatre. After then, the plaintiff filed a lawsuit for assault and wrongful detention. In this case, the plaintiff’s licence was deemed to be granted, and it was determined that it could not be revoked.

Because the revocation was illegal, the plaintiff was not considered a trespasser on the defendant’s property. And as such, he was entitled to considerable compensation from the defendant for assault.

Buckley, L.J. in this case believed that the ruling in Wood v. Leadbitter established the norm that a licence paired with a grant was not reversible. For some reason, no grant was deemed appropriate in Wood’s situation.

Remedies of trespass to land

Four remedies are available for trespass to land. These are:-

If a trespasser disturbs a person’s ownership, he has the right to use reasonable force to get the trespass removed. Person who is therefore entitled to immediate possession and employs reasonable force to reclaim it cannot be sued for trespass. It is not improper to remove a trespass by someone who has a legal authority to do so.

Section 6 of the Specific Relief Act of 1963 provides a prompt remedy to a person who has been deprived of immovable property without due process of law.

Even though a person claims a higher title, he has no authority to evict another without due process of law. And if he dispossesses another by taking the law into his own hands, the individuals dispossessed will be restored to possession under the aforementioned article.

This provision only applies to those who are in legitimate possession. This rule cannot be used by a simple trespasser.

A person who was illegally dispossessed of his land may seek compensation for the loss he experienced during the period of dispossession in addition to the right to regain the land by having the trespasser removed. Mesne earnings are the gains obtained by the defendant during his occupation.

An action for mesne profits is used to obtain such compensation. If the plaintiff so desires, he may bring both an ejectment and a mesne profits suit in the same action. His claim is not limited to the advantage that the defendant got from that land during that time period.

The right to sue for distress damage feasant permits a person in possession of land to take trespassing livestock or other chattels. And retain them until restitution for the harm done is paid to him. The goal is to force the chattel’s owner to pay compensation. And after that money is made, the chattel is to be restored.

A landowner had the right to hold a pony that had kicked his filly after trespassing until recompense for the damage done was paid.

The right is only accessible when the thing in issue is illegally present on specified territory. If, for example, a bull being led gently along a street enters a business through an open door, there is no trespass and no right of seizure in regard of the animal.

There is no right to pursue items after they have left the premises or to reclaim items after the owner has taken them away. It is also important that the item seized be the same item that had trespassed and caused the harm. As a result, if one animal causes the harm, no other animal, even from the same herd, can be taken to exercise the right.