All You Need To Know About The Doctrine of Territorial Nexus 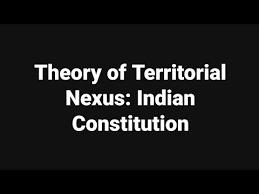 The constitution divides their power so that they can maintain their independence from the executive and legislative branches, Because our constitution is federal, it creates a dual polity between the union and the states. They are given sovereign powers that must be exercised following the Constitution.

Our constitution, as the ultimate law of the nation, defines the fundamental definition of federalism, which is the separation of powers. A nexus between the item and the state must be demonstrated to give effect to laws established by a state for extraterritorial purposes.

The state legislature has the authority to enact legislation within its geographical jurisdiction. Territorial nexus is one such exemption, which permits the state to pass laws governing extraterritorial activity provided it can demonstrate a link between the item and the state.

The following is mentioned in Article 245 of the Indian constitution:

As a result, both the union and the state have the geographical authority for making laws.

Territorial Nexus and the State Legislature

These elements are sufficient to demonstrate that the connection was legal, and the court would not call it into question. Several instances of taxation law have found that a state’s territorial limitations would not impede the sale and purchase of commodities.

Article 245 of the Indian constitution specifies the degree to which legislative powers are delegated to parliament and state legislatures to pass legislation governing the area. Parliament has the authority to enact laws for the subjects over which it has jurisdiction. Parliament has jurisdiction over the entire country or any part of it. They can also be adopted by parliament for extraterritorial activities if the legislation is sufficiently linked to India. These laws cannot be challenged or declared illegal. All legislation, however, must adhere to the requirements of the Indian constitution.

The following conditions must be met to invoke territorial nexus jurisdiction:

In the present case, the state of Bihar enacted laws with the goal of protecting the holdings of Hindu religious trusts. This statute encompasses all trusts within the boundaries of Bihar. So the respondent Madea’s trust deeded numerous of her assets in Bihar and Calcutta, and the trust was inside Bihar’s territorial limits. Several issues have been raised regarding the scope of this statute. It was decided that the act passed by the state of Bihar might have an effect on property located outside of Bihar’s territorial limits, provided that the trust is located inside the state’s borders and there is a sufficient link.

There is one exemption that allows the state legislature to pass legislation for extraterritorial purposes if the object and the state have a sufficient relationship. It indicates that the thing must be placed outside the state’s borders and have a territorial relationship to the state. The scope of territorial connection is broad and may be used outside of India’s borders. The theory of territorial linkage permits the impact of the law to extend beyond a nation’s borders.