All You Need to Know About DOCTRINE OF CONSTRUCTIVE NOTICE 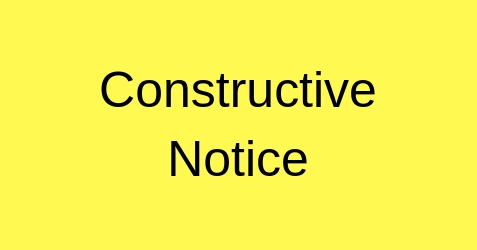 It is legal friction that someone actually received a notice being informed of the case which affects your interest whether they did not truly receive it.

The Doctrine of legal notice is related to the contract act. The legal notice is given by the court and published in the newspaper to aware the parties involved in a dispute, and it is assumed that the person gets the notice regarding dispute matters.

PURPOSE OF THE CONSTRUCTIVE NOTICE

the ultimate purpose of the constructive notice is to inform the parties about the legal matter or disputes between them, so no one can escape from the matter which is run in the court.

DOCTRINE OF CONSTRUCTIVE  NOTICE UNDER THE COMPANIES ACT 2013

The doctrine of constructive notice as according to the company’s law is a doctrine where all persons dealing with a company are deemed to have knowledge of articles of association and memorandum of association of the companies.

Section 399 of the Companies Act, 2013 points out the rules and regulations governing the inspection, evidence of documents with the Registrar and production, it includes the doctrine of constructive notice. In this doctrine, also explains the following,

There is a constructive notice not merely of the memorandum and articles of association, but also of the documents, such as the special resolution mentioned in Section 117 which are required by the Act to be registered with the Registrar. There cannot be a notice of documents that are filed only for the sake of the record, like returns and accounts. According to Palmer, the principle applies only to the documents which affect the powers of the company.

(a) The constructive notice is known as legal friction .

(b)The notice becomes important to inform the parties, of the matter in the court for the dispute.

(c) constructive notice is known as superior to actual notice.

So the decision of the court applied the doctrine of Constructive Notice and the defendant’s company was held not bound by the agreement.