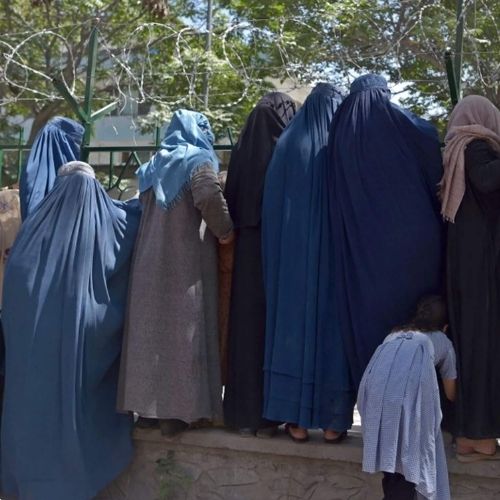 Women’s rights in Afghanistan have been varied throughout history. Women officially gained equality under the 1964 constitution. However, these rights were taken away in the 1990s through different temporary rulers such as the Taliban during the civil war. Ever since the Taliban regime was removed in late 2001, women’s rights have gradually improved under the Islamic Republic of Afghanistan and women are once again equal to men under the 2004 constitution, which was largely based on that from 1964.

However, their rights are still complicated by a reactionary view on women by certain classes of school, particularly rurality, which continue to cause international concern. When the Taliban took control of most of Afghanistan in 2021, concern about the future for women in the country increased.

ABUSES OF AN OPPRESSIVE REGIME

Before the rise of the Taliban, women in Afghanistan were protected under law and increasingly afforded rights in Afghan society. Women were making important contributions to national developments and had been active in humanitarian relief organisations until the Taliban imposed severe restrictions on their ability to work.

The Taliban version of Islam is not supported by the world’s Muslims. Although the Taliban claimed that it was acting in the best interest of women, the truth is that the Taliban regime cruelly reduced women and girls to poverty, worsened their health, and deprived them of their right to education, and many times the right to practice their religion. the Taliban is out of step with the Muslim world and with Islam. Afghanistan under the Taliban had one of the worst human rights records in the world.

The assault on the status of women began immediately after the Taliban took power in Kabul, the capital of Afghanistan. The Taliban closed the women’s university and forced nearly all women to quit jobs, closing down an important source of talent and expertise for the country. It restricted access to the medical core for women, brutally enforced a restrictive dress code, and limited the ability of women to move bout the city. The Taliban perpetrated egregious acts of violence against women, including rape, abduction, and forced marriage.

Afghan women living under the Taliban virtually had the world of work close to them. Forced to quit their jobs when the Taliban took over, women could work only in very limited circumstances. A tremendous asset was lost to a society that desperately needed trained professionals. As many as 50,000 women, who had lost husbands and other male relatives during Afghanistan’s long civil war, has no source of income.

Many were reduced to selling all of their possessions and begging in the streets, or worse, to feed their families.

Last year, after 20 years in Afghanistan, the U.S. signed an accord with the Taliban agreeing to withdraw troops if the Taliban served ties with al-Qaida and entered into peace talks with the government. During a talk, Taliban leader emphasizes that they wish to grant women’s rights “according to Islam.” But the women believed that the Taliban still rejects the notion of gender equality.

The Taliban included no women in its own negotiating team, and as their local fighters and taking over districts, women’s rights are being rolled back. Using mosque loudspeakers, Taliban fighters in areas under their control often announce that women must now wear the burqa and have a male chaperone in public.

In Taliban-run religious schools for girls, students learn the “appropriate” Islamic role of women, according to the Taliban’s harsh interpretation of the faith. Such actions demonstrate to many in Afghanistan that the Taliban disagree with the basic principles of democracy.

TALIBAN TERROR: BACK OF DARK DAYS

The women of Afghanistan are once again petrified to roam around freely and radical Taliban are back to haunt them in their safe-havens. However, the horrid winds of darkness blew away those few specks of ‘independence’ from the lives of women who are now nothing but commodities in the eyes of the Taliban extremists.

A Taliban directive in July asked local religious leaders to provide them with a list of girls over 15 and widows under 45 for ‘marriage’ with Taliban fighters. The increasing onslaught of the Taliban in Afghanistan that includes their move to control women has generated fear.

For Afghan women, the terror may have just begun. In early July, after Taliban leader who took control of the province of Badakhshan and Takhar issued an order to local religious leaders to provide them with a list of girls over the age of 15 and widows under the age of 45 for ‘marriage’ with Taliban fighters.

This Taliban directive serves as a stark warning of what lies ahead and a harsh reminder of their brutal 1996-2001 regime during which women were subjected to persistent human rights violations, denied employment and education, forced to wear the burqa and not to leave home without a male.

Offering ‘wives’ is a strategy aimed at luring militants to join the Taliban. This is sexual enslavement, not marriage, and forcing women into sexual slavery under the guise of marriage is both a war crime and a crime against humanity. In 2008, the United Nations Security Council adopted resolution 1820 and it recognizes sexual violence as a tactic of war intent on humiliating, dominating and instilling dear in civilian members of the community.

What happens now to the women in Afghanistan will depend a lot on how the UN reacts to prevent atrocities. At present, there are only four women peace negotiations on the Afghan government’s team and none on the Taliban’s.

Amid this critical situation, women in Afghanistan and across the region would welcome efforts by the UN and the international community to ensure that survivors of sexual violence have equal protection under the law and equal access to justice.