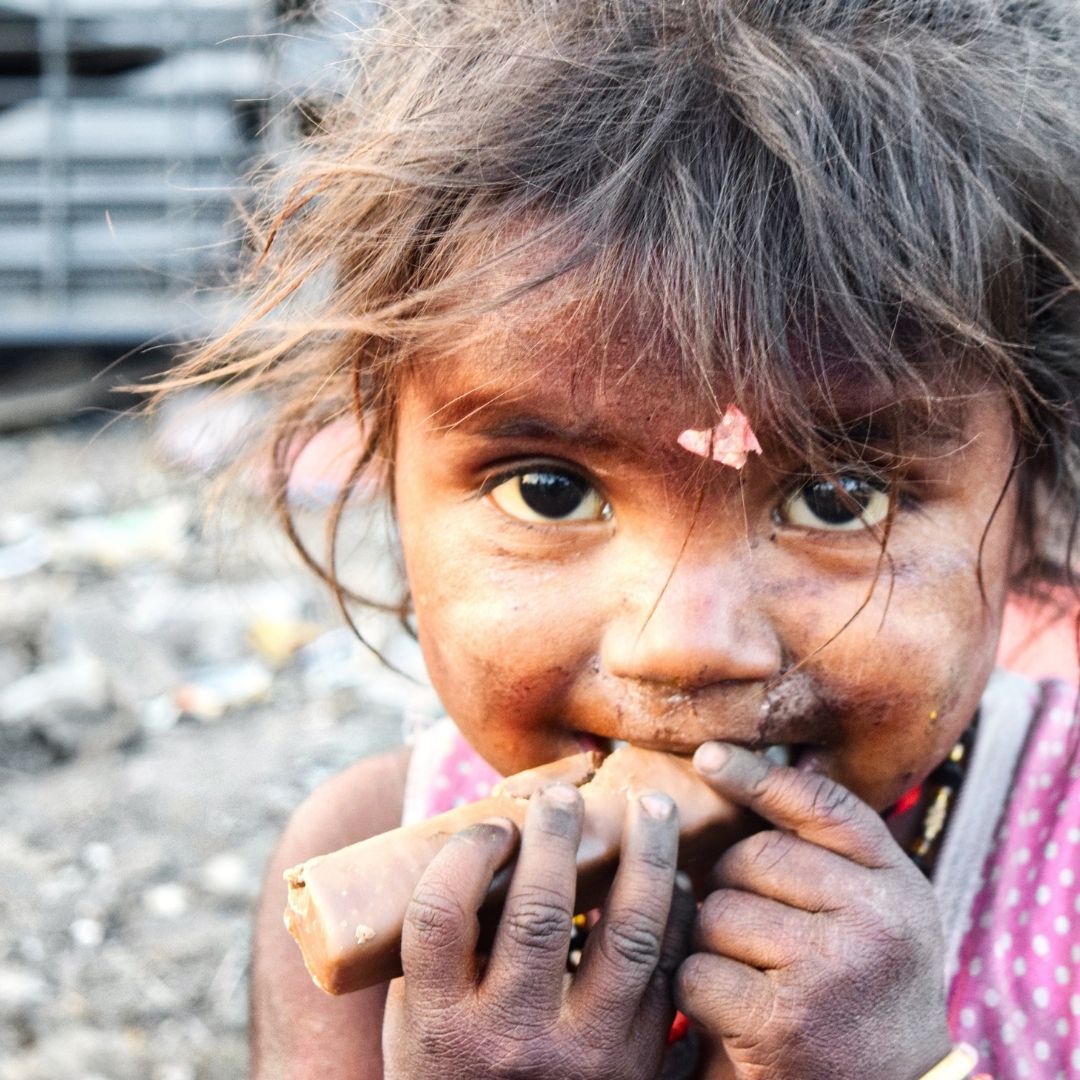 “Half the world’s starving; the other half is trying to lose weight”

India has a constantly growing population of more than 1.3 billion. While its economy is booming, its unequal wealth distribution has created an issue for a large portion of the population. Over the past few decades, hunger in India has remained a prevalent issue for the population.

However, despite phenomenal industrial and economic growth and while India produces sufficient food to feed its population, it is unable to provide access to food to a large number of people, especially women and children.

STATE OF HUNGER IN INDIA

According to FAO estimates in ‘The State of Food Security and Nutrition in the World, 2020 report, 189.2 million people are undernourished in India.

By this measure, 14% of the population is undernourished in India. Also, 51.4% of women of reproductive age between 15 to 49 years are anaemic. Further according to the report 34.7% of the children aged under five in India are stunted (too short for their age), while 20% suffer from wasting, meaning their weight is too low for their height.

Malnourished children have a higher risk of death from common childhood illnesses such as diarrhoea, pneumonia, and malaria. The Global Hunger Index 2019 ranks India at 102 out of 117 countries based on three leading indicators — prevalence of wasting and stunting in children under 5 years, under 5 child mortality rates, and the proportion of undernourished in the population.

The GHI 2020 report has placed India in 94th position among 107 countries, much behind Bangladesh, Pakistan and Nepal. The situation is grim and the country is battling widespread hunger.

UNDERNOURISHMENT AND MALNUTRITION IN INDIA

That number remains the same today. Lack of proper diet leads to stunted growth for children; in India, 37.9% of children under the age of five experience stunted growth due to undernourishment.

Malnutrition is one of the bigger implications of the overarching problems India has to deal with: a wide range of hunger, extreme cases of poverty, overpopulation and continually increasing population, a poor health system, and inaccurate national statistics due to the aforementioned overpopulation.

According to the 2018 Global Nutrition Report, India will not reach the minimum nutritional goals by 2025 set by the World Health Organization. With 46.6 million children stunted in growth, India “bears 23.8% of the global burden of malnutrition.” These goals include “reducing child overweight, wasting and stunting, diabetes among women and men, anaemia in women of reproductive age and obesity among women and men, and increasing exclusive breastfeeding.”

Data from the latest edition of the State of Food Security and Nutrition in the World (SOFI) report show that India retains the dubious distinction of being the country with the largest population of food-insecure people.

Estimates presented in the report which was released by several United Nations organizations show that the prevalence of food insecurity increased by 3.8 percentage points in India between 2014 and 2019, the first term of the Narendra Modi government. By 2019, 6.2 crores more people were living with food insecurity than the number in 2014.

India accounted for 22% of the global burden of food insecurity, the highest for any country, in 2017-19. It is also noteworthy that while the PMSFI increased in India by 3.7 percentage points during this period, it fell by 0.5 percentage points in the rest of South Asia.

The significant rise in food insecurity, as shown by these data, is a clear manifestation of the overall economic distress during this period marked by a deepening agrarian crisis, falling investments across sectors and shrinking employment opportunities.

The latest PLFS data have shown that the unemployment rates in recent years have been higher than in the last four decades. It is widely believed that demonetization and the introduction of the Goods and Services Tax were two prime causes of economic distress during this period.

A sudden imposition of an unprecedented and prolonged lockdown in the wake of the COVID-19 pandemic has brought renewed focus on the problems of hunger and food insecurity. With a sudden loss of livelihoods, a vast majority of India’s poor are faced with increased food insecurity, hunger and starvation. Several starvation deaths have also been reported in the media.

HOW COVID-19 MADE THE SITUATION WORSE

The course of the COVID-19 pandemic has made these conditions worse. The virus has disrupted global and local food systems, and India’s poor and hungry are being affected worse than ever.
A hasty nationwide lockdown shook the country, including its fragmented and fragile food systems and supply chains.

The Food and Agricultural Organisation (FAO) estimates nearly 40% of the food produced in India is lost or wasted every year due to inefficient supply chains.

A lack of cooling and storage facilities in India also means 20% of the entire food production gets lost before it reaches the marketplace.

The pandemic amplified the vulnerabilities of the national food system. It has disrupted local, regional and national supply chains, adding to the impacts of the country’s food waste problem.
Small growers have had to sell their produce at a loss if they have been able to sell it at all. Onions are rotting in containers, a consequence of plunging catering services.

The lockdown measures resulted in severe labour shortages, delaying the mid-April wheat harvest by two weeks. In the potato-producing states of Uttar Pradesh and West Bengal, increased demand from returning migrant workers pushed up prices by 9% at the wholesale level and 11% at retail.

Imports of food have also stalled due to the COVID-19 pandemic. Partial port operations and the closure of roads and air cargo have hampered the movement of grains across the country.

Food insecurity and hunger have been constants throughout history. During times such as the Great Depression, the government has stepped up to help those suffering.

Today, there are still many in similar situations, although the problem of hunger has become invisible. The government is still making efforts to aid those in need, and thanks to research and media coverage, the issue of food insecurity is becoming more transparent.